Does the Alcohol Really Burn Off? – Cooking Clarified
Share this... 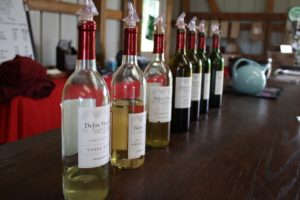 You’ve likely heard the adage, “I love cooking with wine. Sometimes I even put it in the food.” There’s some controversy as to who coined the phrase but there’s no question that a splash (or more) of alcohol can enhance the flavor of any dish. I’ve read recipes and heard many a cook vow that the point of adding booze to food is to take advantage of its flavor and that the alcohol evaporates away during cooking. But does the alcohol really burn off?

A study by the USDA’s Nutrient Data Laboratory found that in dishes that are flambéed only 25% of the alcohol burns off, which means most of it (75%) sticks around. Simmer or  bake a dish for 1 hour and you’ll burn off 75% of the alcohol or for 2 1/2 hours to burn off 95%.

So, how does this translate to your kitchen? Quick sautés and deglazes won’t cook long enough to burn off the alcohol. You’ll have to rely on a longer cooking time if eliminating the alcohol – or at least most of it – is your goal.

Try a little cocktail cookin’ with these recipes:

Flour 101 – Choose the Right Flour for the Job

Share this…FacebookPinterestTwitterLinkedinIt’s important to stock your pantry with the right flour for the right job. Most recipes will specify what type of flour you should use, but just in case, here’s a quick primer on […]

Share this…FacebookPinterestTwitterLinkedinNo grill kit is complete without skewers, thin metal or wooden sticks used to hold small pieces of food together on the grill (think kebabs). They have one pointy end for piercing food as […]

Share this…FacebookPinterestTwitterLinkedin Stocking your kitchen can be overwhelming, especially if you’re uncertain about the tools you’ll need. If you’re chopping ice, pureeing soups, or making dough, a food processor or blender will make your life […]