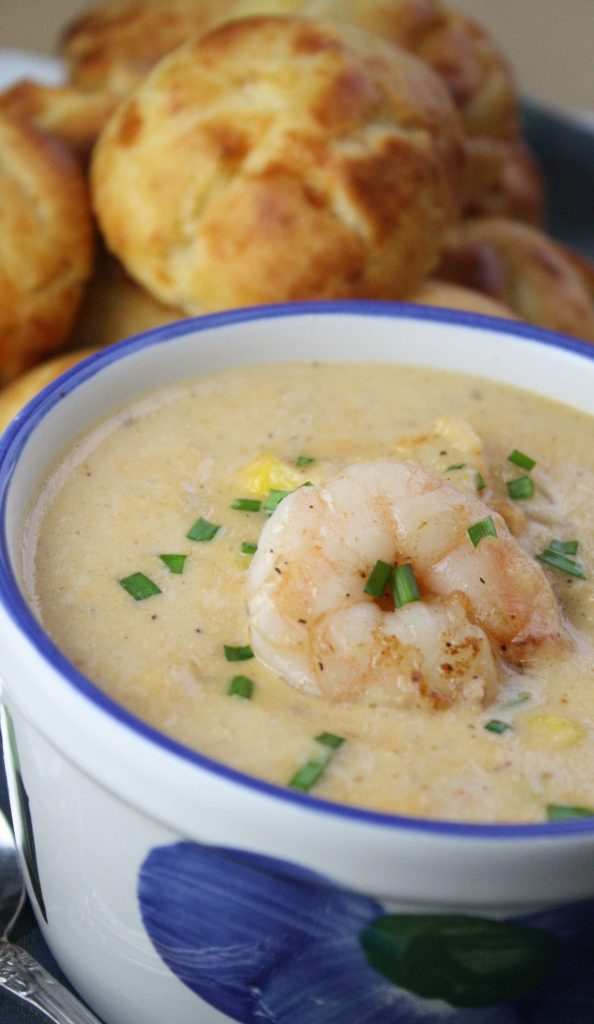 Have some Shrimp & Corn Chowder or Chow-dah. However you say it, you need some of this in your bowl, at your table, everywhere. Say it with me, “I will eat chowder here and there. I will each chowder EVERYWHERE!” And you’ll be able to eat it everywhere because I’m here to teach you how to make it!

So, what makes chowder chowder? Chowders are super-thick soups traditionally made with chunks of seafood, potatoes and other vegetables. These days they’re made with a variety of ingredients – from chicken to beef to all-veggies and some even without potatoes (like this one).

This is not a traditional chowder. It has the seafood (shrimp), the thick consistency, and the veggies (corn is the star). It’s missing the potatoes and a bacon kickstart. (Many start by browning chopped bacon in your pot. The bacon’s removed temporarily but the glorious bacon fat remains.) To save a little time, I start my Shrimp and Corn Chowder by melting a couple tablespoons of BUTTER because nothing bad starts with butter. Despite the butter and a little half-and-half it’s lighter than most chowders but it’s still creamy and rich and hearty enough to keep it honest.

The process for making chowder is simple. Here you go.

1. Pick your oil.  Start with a tablespoon or two of olive oil or butter in a hot pan. If you want to go old school, brown 3 or 4 slices of chopped bacon in your pot.

2. Once your oil’s hot, add your protein – shrimp, chicken – and saute until cooked through or browned.  Add veggies to your pan and sweat them until tender.

3. Stir in your liquids – be careful not to let it boil once you’ve added your half-and-half or cream. Simmer.

4. Purée about half the chowder and return it to the pan. Simmer for another 5-7 minutes, stirring occasionally to make sure the chowder’s evenly-mixed.

5. Check your seasonings and serve!!

Now go, get your chowdah on!!

TIPS:
Make sure to place cooked shrimp on a clean plate. Using the same plate that held raw shrimp can cause cross-contamination.

Don’t let the chowder boil! As soon as it bubbles, lower the heat until it simmers. High heat can cause the fat in the half & half to separate, leaving an oily ring on the surface of your chowder.

Cover the top of your blender with folded kitchen towel before blending.  If any hot chowder escapes you won’t get burned. 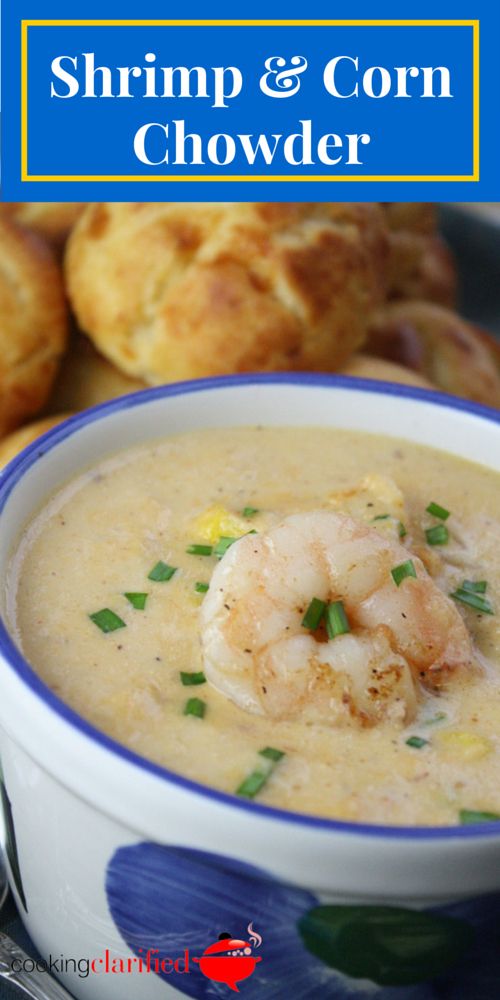 Share this…FacebookPinterestTwitterLinkedinNo grill kit is complete without skewers, thin metal or wooden sticks used to hold small pieces of food together on the grill (think kebabs). They have one pointy end for piercing food as […]

Share this…FacebookPinterestTwitterLinkedin Mini Toasted Turkey & Mozzarella Sandwiches are going to be your new favorite thing. I promise. I love most foods, but no menu excites me more than a slew of appetizers for me […]

Share this…FacebookPinterestTwitterLinkedin It’s football season, which for me translates to football food! If I’m being honest, I could give or take the game, but I LOVE the let’s-get-together-and-eat-and-drink part. And what do people want to […]