Greek Yogurt – Cooking Clarified – What is Greek Yogurt?
Share this... 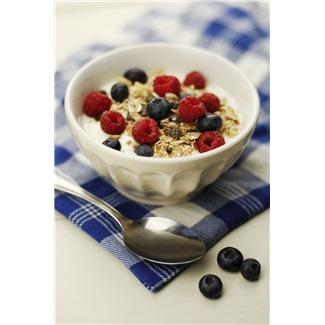 Greek yogurt is a richer, creamier version of run-of-the-mill yogurt. I am not a lover of yogurt in general, but there’s something about silky, thick Greek-style yogurt that makes my tzatziki – and everything else – taste so much better. What separates it from regular yogurt is not that it’s produced in Greece, but the manner in which it’s made.

What is Greek Yogurt?

Yogurt is made by adding active cultures to milk that’s been heated. It’s then strained to get rid of excess liquid or whey. Regular yogurt is also strained, but this type is strained numerous times to create a thicker, creamier yogurt. The extra straining removes the excess moisture in the yogurt, leaving behind a yogurt with a texture that’s denser than regular yogurt. If you continue to strain yogurt, you’ll end up with Labneh, yogurt strained to the point of a cream cheese-like texture, frequently used in Middle Eastern cooking.

There are also some health benefits related to Greek yogurt. By straining out the excess whey, the yogurt ends up with fewer carbs, less sodium and sugar. It is typically higher in fat, though there are lower fat versions available, and is a good source of Vitamin B-12, calcium, protein and probiotics.

How to Use It

You can use Greek-style yogurt in recipes as you would regular yogurt. I often use it in recipes that call for sour cream, as well. You can put this yogurt to delicious use in these fantastic recipes:

Learn to make your own yogurt from scratch here!

Share this… Facebook Pinterest Twitter Linkedin And now for a fancy French cooking term that will boost your culinary street cred when dropped casually in conversation. Mirepoix (pronounced meer-uh-pwa) is a simple mix of coarsely […]

How to Make Crisp Waffles From Scratch

Share this… Facebook Pinterest Twitter Linkedin Oh, waffles. How do I love thee? Let me count the ways. 1. I love all your nooks and crannies, perfect for cradling fruit and syrup and whipped cream. […]