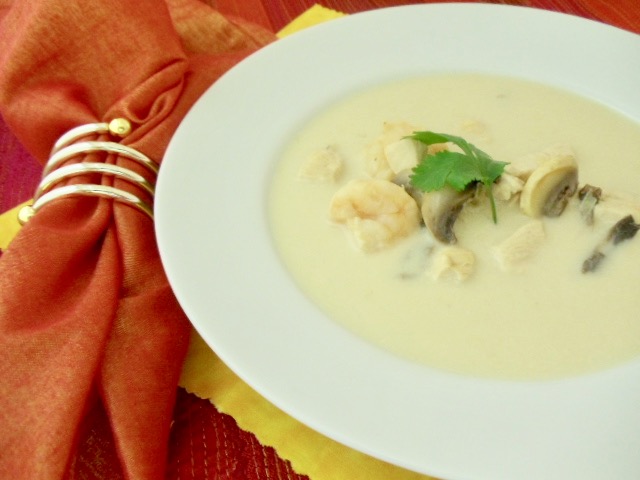 I had the best Thai food of my life…in Paris…over the Thanksgiving holiday. Go figure, right? We’d spent the day strolling the rues, treated our daughter to a very hip art exhibit then headed out into the rain and cold in search of dinner. Can we talk about the contrasts of Paris? It is one of the most beautiful cities in the world (IMO) and its beauty shines through the gloomiest, rainiest, dreariest of weather, but I digress. Back to the lecture at hand. Thai food. Paris. Cold.

I have to say there’s nothing quite as odd as a Thai menu written in French. I ordered something I couldn’t identify on the menu or on my plate once it arrived — a motley crew of crunchy, deep-fried nuggets.

Everyone else had ordered The Soup — broth, coconut milk, lemongrass, chicken and mushrooms. Yum or Tom kha gai as it’s affectionately known. Back in the states, I headed straight for the Asian market for supplies and simmered up my own version with chicken and shrimp. Soup’s on!

TIPS:
Galangal is a cousin of ginger. If you can’t find it, fresh ginger will make a decent substitute.

How To Chiffonade Fresh Herbs

Share this…FacebookPinterestTwitterLinkedinAnd for our latest installment of fancy French cooking terms, I give you CHIFFONADE, the term for cutting fresh herbs with large leaves into thin, ribbon-like strips. Basil is the perfect herb to for […]

Share this…FacebookPinterestTwitterLinkedinChoosing the right type of potato to cook with can make or break a dish. Potatoes fall into one of two categories — mealy vs waxy potatoes. Mealy potatoes (russets, purple) have thick skin […]

Share this…FacebookPinterestTwitterLinkedinRice paper wrappers are super thin, crisp, circular sheets made of rice flour, salt and water. A quick soak in warm water and they soften to create the slightly chewy, tasteless skins that we […]